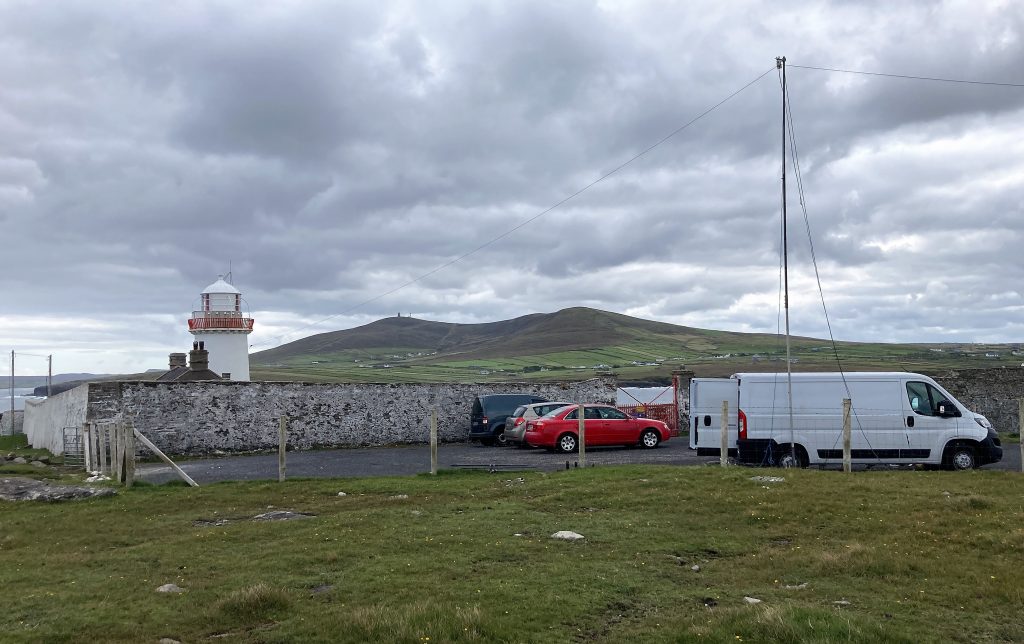 Broadhaven/Ballyglass Lighthouse Activation.   (ILLW No: IE0006,
Call Sign: EI7MRE. WAI: F73. Maiden Head Locator: IO54BH.
We eventually got to activate Broadhaven/Ballyglass Lighthouse, North Mayo for Sunday 21st August 2022 the International Lighthouse Lightship Weekend – ILLW.  The basic objective of this event is to promote public awareness of lighthouses and lightships and their need for preservation, restoration and at the same time to promote amateur radio and to foster International goodwill.

We set off at 7am on a beautiful sunny Sunday morning. It was exciting once again that we had the freedom to get out on a field day as a club to be able to activate a location of interest for the benefit of other like minded people.

It has been four years since we had activated a lighthouse for ‘The International Lighthouse Lightship Weekend – ILLW’  especially this year 2022 as it was the celebration of the Silver Anniversary of the International Lighthouse / Lightship weekend! 25th year in existence, which is normally held on the 3rd full weekend in August.
Living on the rugged/jagged West Coast line of Mayo we benefit from having a choice of a number of lighthouses that we can choose from, which are the essential lights to seafarers at night who travel up and down by our treccours coastline.
The most easily accessed lighthouse for members of the Mayo Radio Experimenters Network to activate are the lighthouses on the Mullet peninsula, Blacksod Lighthouse and the Ballyglass/Broadhaven Lighthouse.
This year we chose to activate a different Lighthouse, the Broadhaven/Ballyglass Lighthouse  which is located on the North side of the peninsula, it already had a ILLW number IE – 0006 from it having been activated on a previous occasion by another radio amateur. Our usual Lighthouse was the  Blacksod Lighthouse which is located on the south side of the peninsula.
Thanks to all those that made the journey to Broadhaven to make the activation possible: Jimmy EI2GCB, Padraic EI9JA, Phil EI9KP, Tom EI4KY, and newly licensed amateur Eamonn EI7LC who travelled from Tuam, Galway to be there for setup. We arrived on site after 9.00am. We then proceeded to set up the field day station for the occasion. Weather conditions were warm and calm giving rise to us being eaten by midgets. Three 10ft sections were coupled together with a doublet antenna attached, raised and secured then anchored at the North and South ends. Using an S.E.M. Z MATCH to couple the ladder-line to the Icom IC-7300 which was powered by a bank of batteries for the day, we used a laptop for logging. All was ready to go on air by 10.30am. Before we started we had developed a big appetite for an open air breakfast.  We operated on different bands changing frequency as propagation and conditions changed all day long. All present had turns and times at login and operating the station throughout the day.
The fine Sunday brought a lot of visitors to the area looking and photographing the rugged coastline and its beautiful scenery giving rise to traffic jams on occasions. We had quite a few people enquiring about our setup and what its purpose was, even the satisfaction of seeing the joy on the face of a 10 year old lad whose name is Oisin speak to another radio amateur who took the time to communicate with him in English for a few minutes. We are sure this would have been the highlight of his afternoon.
We had a very good day all round and enjoyed the get-together as a clubs field day again, apart from the lumps we suffered from bites of the midges.
A link to some pictures of the day21/08/2022 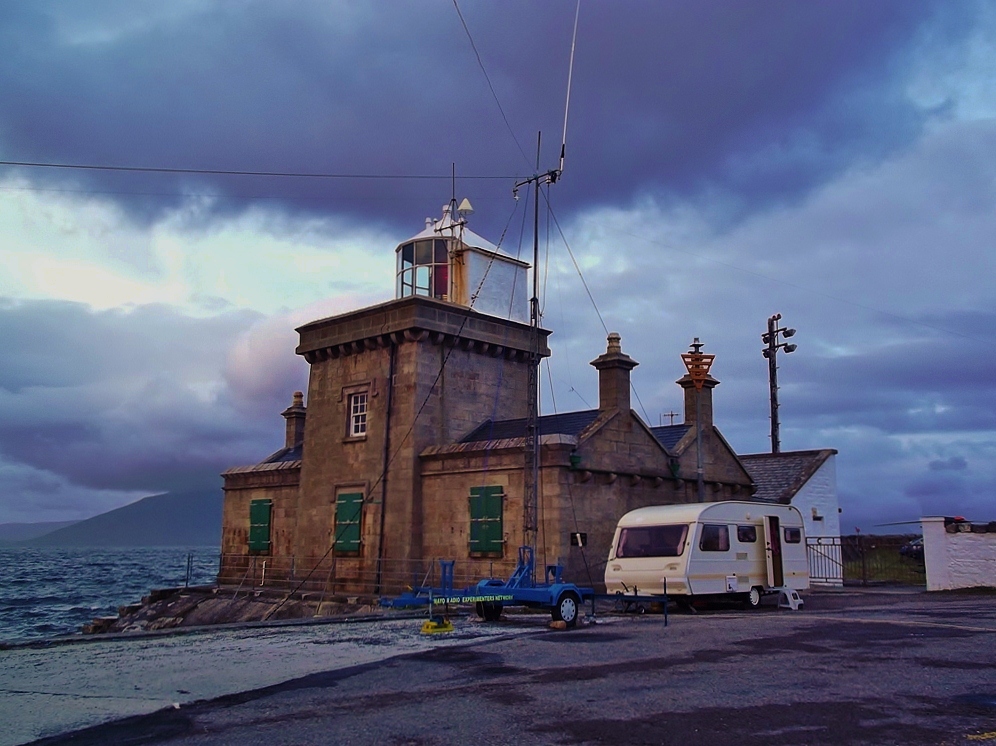 After a two year break the club decided to activate the lighthouse again. The band conditions have been very poor all year so was marginal whether it was worth going.  Friday evening the decision was made “go”. As this weekend is not a contest but lighthouse activity casual contacts were the order of the day.  Any contact is a good contact.

The caravan was dragged out of its resting place and EI2GCB, EI9JA,EI9JS set off for the Mullet peninsular.  The WX started very well bright sunshine, when I left my house and traveled towards Castlebar black clouds loomed and the wind increased. 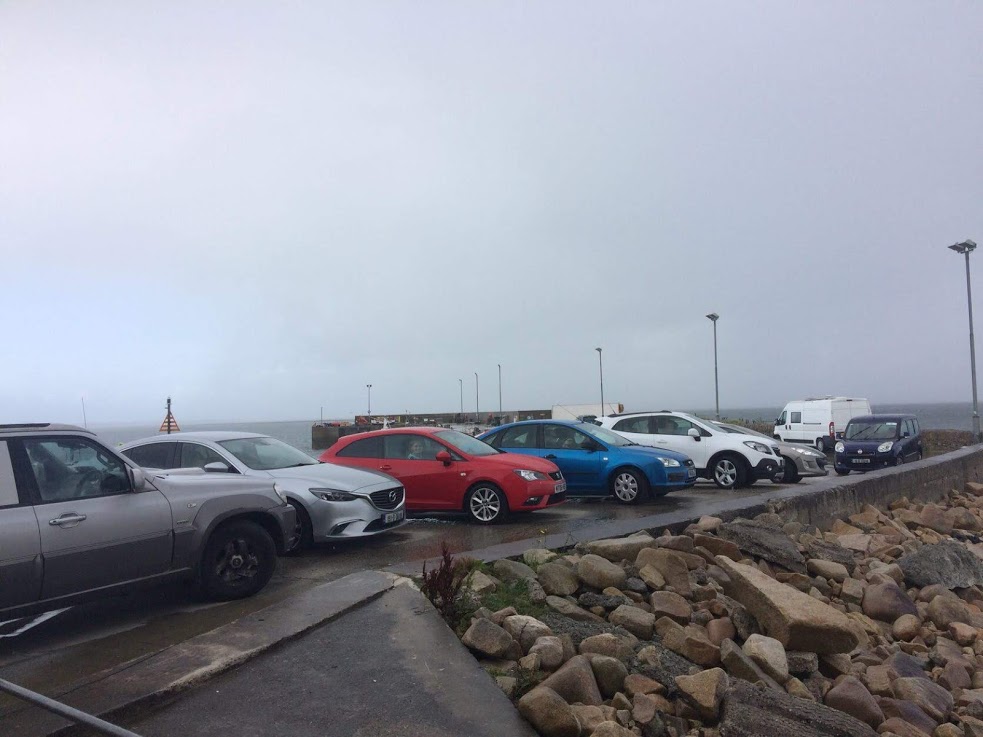 When we arrived at the lighthouse the pier was very busy with cars and holiday makers.  After some negotiation we manged to park the caravan in its usual location.  Then assembly of the station started by this time the wind had pick up substantially and a decision had to made over which antennas would be used.  The sea was very rough so the vertical antenna attached to the railings of the lighthouse was abandoned, as when the tide came in the antenna would get smashed to pieces   The clubs trusty doublet was the only option which was attached to the lighthouse.  Fitting the antenna at the top was challenging but went smoothly.

When unpacking the caravan we realized some kind individual have been in it and removed the power hookup wire along with plates cutlery and any other loose items.  After some scratching of heads an alternative method was used.  The next problem was the realisation the power lead for one of the ic7300’s was missing, with that and no vertical antenna this ruled out having two stations running.  The doublet was connected to Ic7300, balance atu and computer,  EI0M was up and running.

Band conditions and the weather were challenging far too windy for barbecue and not much activity on radio. 20 meters seem the most usable so Jimmy EI2GCB and Dominic EI9JS took turns operating.  Padraic EI9JA went off into the back of his van and found some fittings to get more of the electrics of the caravan working.  We would need lights later.  Small pileups came and went as stations were keen to work the lighthouse.  As usual there was a lot of interest by visitor to lighthouse about the activity.

When the tide came in waves were crashing over the railings where the vertical would have been placed along with this it brought some heavy squally showers, the decision not to use the vertical seem to be a good one. For the rest of the evening we carried on operating on 20m, 40m and 80m with a steady stream of contacts.  During the night the weather was quiet rough and it was challenging to stay in the caravan at times.

As is normal on the Mullet peninsular the next morning was completely different it was bright and sunny. 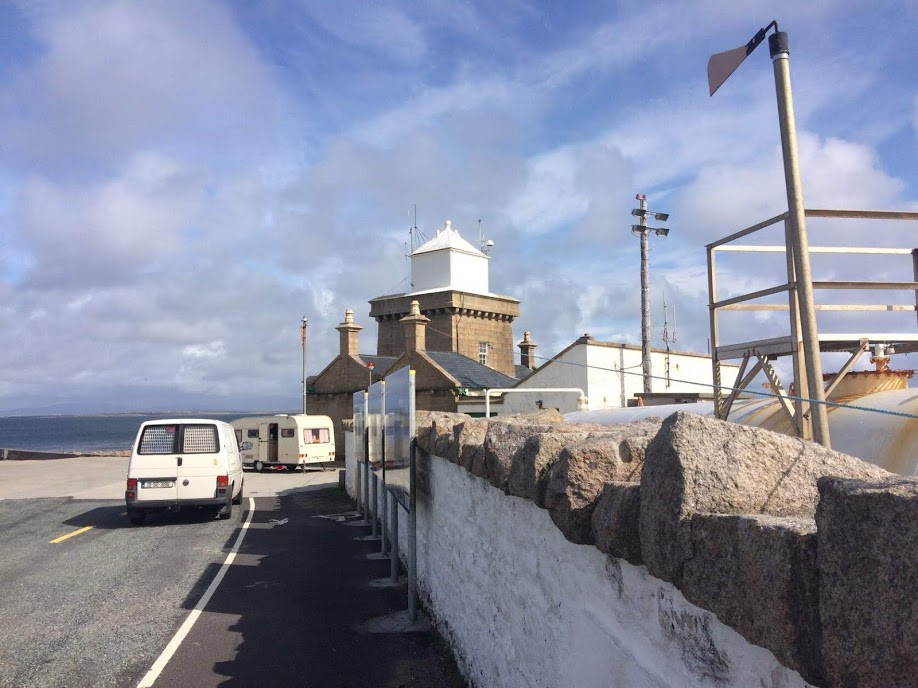 The cooker and barbecue were fired up and breakfast was made and eaten.  The day turned out to be very nice and a steady stream of contacts made, a number of other lighthouses went into the log, some good conversation between the stations conducted.  The bands started to go quiet in the early afternoon so the decision was to start packing up and have something to eat.  Following this we headed home.

A great time was had by all that attended and again thanks to Vincent Sweeney who made us welcome at the lighthouse.