The clubs AGM was held on Wednesday the 5th October

There was a good attendance for the meeting.  The treasurers report on the clubs finances was read out, this was followed by the chairman’s report.  In this he thanked all the club members for there help and support through out the year.

Next item of the meeting was the election of the 2016/17 officials for the club the result is listed below.

After this was concluded there was a lively debate of the clubs activities of this year and next years activities and activations.

Thanks to all that attended

A new radio for the club

This year we decided to retire the clubs Yaesu FT897 which had served on many events down the years.  After much deliberation it was decided to go for a brand new radio.

The radio which is catching the attention of many as good value for money is the Icom IC7300.  So one of these has been purchased and here it is. 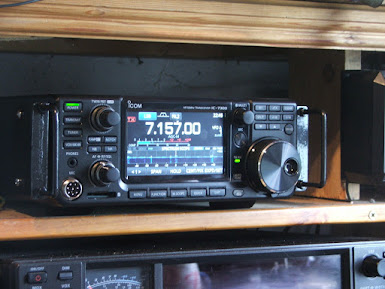 The rack handles had to be fabricated as we have found the ones fitted to the clubs IC 7200 have protected the front of the radio in transit.  With this and the IC 7200 we now have two good radios for portable work.  They both can run digital modes with ease on the various activations. Both sets have been now tested with N1MM+ WSJT WSJT-x and FL-Digi.  These are the software packages we favour when out with club activations.