Phil EI9kp is now running a personal beacon on 40.150 Mhz cw while he is in active his shack.

This is for propagation tests and not 24 hr,  and only until the proposed new beacon for the 8 meter band is operational.

Radio update for use on 8 meter band

Any of the above that have been wide banded will work on the new allocation.  Although these some of these radios will seem to tune to the new 5 meter 54MHz allocation, none will operate successfully.  The only sensible option for this band is a transverter.

Also worth noting that if the current used when operating out of band is very high against the power output there may be a problem  filtering and the operating on that frequency.

P.S. The use of radios on this band is at the owner’s risk.

With the advent of this band being opened up for amateur use.  Some of the club members had discussed how we could operate on this band.  Brendan EI6IZ did some test with his ft 817 and it tuned up to 32 MHz from the 10m section and down to 32 MHz through 40 MHz from the 6m section. This made the radio usable for the new 8 meter band.  Dominic EI9JS then thought that if the 817 can then possibly its bigger brother the 857 can.  Guess what it dose so now some readily available radios for the band.

Phil EI9KP ( ON4TA ) was back in Ireland and was keen on doing some test on this new allocation, as the only know activity is the Denmark beacon on 40.071 MHz.

The only radio he had for the band was vertex pmr radio which was on the band but only 47 MHz FM.  More test with the ft 857 was required as he had one of those used for sota activation.  Dominic set was put on the test set and proved to be fine on tx with 2nd harmonic being at least 60db down and 3rd non existent with the equipment available.

Antennas would be next and wire dipole was constructed for the first test.  the first contact was made on fm.  Not satisfied with this Phil converted his own Ft 857 to operated on the band.  Also he constructed a delta loop for the band.

A more substantial dipole was fitted to the tower at EI9JS QTH and the first real two way contact was made on 40.250 MHz ssb on the 19 oct at 20.29 utc.  More tests are planned in a variety of modes.

These antennas are big.

Click on picture below for more images of the antennas and band pass filters. 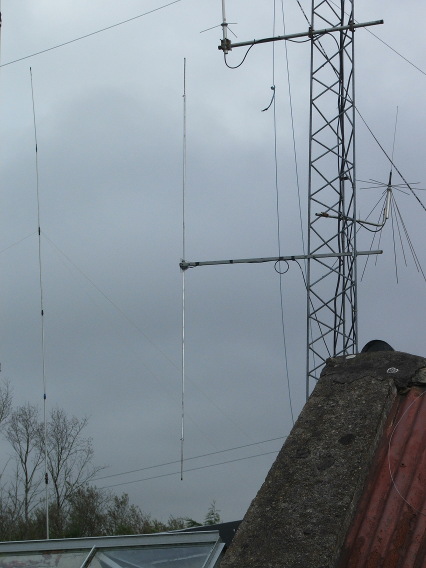 Bookmark these web pages for updates on radios and antennas that can operate on 8 meters.

The sun was shining and torrential rain had stopped.  Cabin fever had struck so a club away mission was planed,  ringing around Saturday evening before the contest the usual crew plus dogs were assembled.

EI7MRE/p arrived on location and was set up.

12.00 was the start time, fine all was set up with plenty of time.  We started at 12.00 only problem it was local time and not UTC. First mistake of the day should have paid more attention to the small print.

Click on above image for more images of the day

Next issue we had was  a persistent RF hash from the generator on the low bands.  This is a problem that will have to be addressed before the next outing.  When the equipment was returned home one of the patch leads was found to have faulty screen.  This may have had an affect some more testing is required.

Even though we are at a very low part of the solar cycle there was a good turn out on the bands.  The band condition did close early so we didn’t run to the end.  Early home this time, thanks to all that were active through out the event.